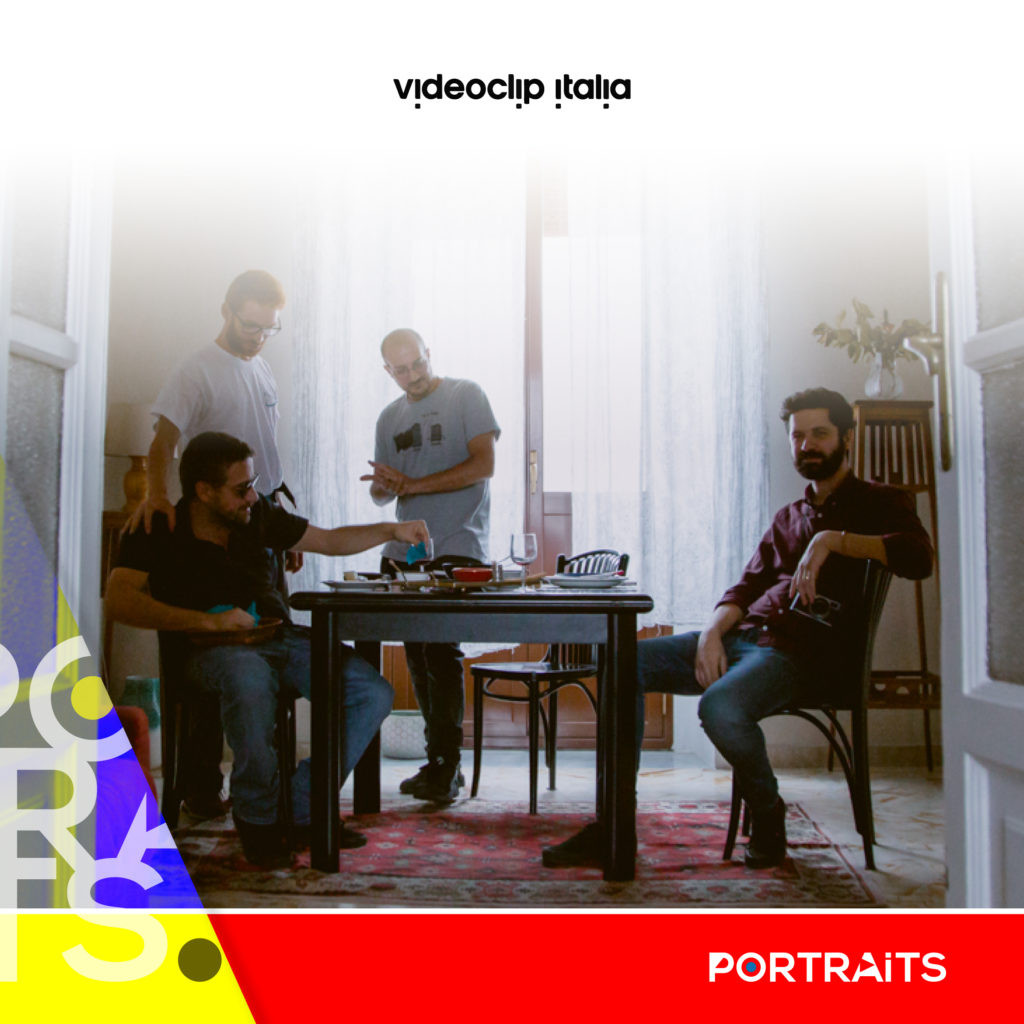 For our second episode, we decided to interview Cinepila collective. Based in Catania – like Ground’s Oranges, who we interviewed on the Episode 01 -, Cinepila are the authors of some of the most original italian music videos. Their work stands out for the beautiful sense of frame composition and the elliptical structures of their stories which often activate the spectator role.⁠

Cinepila is an artistic collective founded in Catania in 2012. Our work involves audiovisual productions.⁠ The idea behind the project is a transversal and contaminated approach to cinema in all its forms – from music videos to documentaries, and from advertising to genre cinema and video art.⁠ The collective is comprised of Giovanni Tomaselli, Premananda Das, and Rosario Samuel Adonia, plus a group of industry professionals involved in the project, some of whom are now permanent.⁠
Cinepila has made music videos for Ermal Meta, Cesare Basile, Cordio, Skom, Edy, Norgdarden, Dimartino, and others.⁠

WHAT IS A MUSIC VIDEO?

«For us, a music video is, or should be, the sum of a collaboration between creatives and artists from different fields. A work in which music and cinema converge to find a balance and enrich each other. And we don’t use the word “cinema” out of proportion, as we believe that music videos are basically one of the many forms that cinema can take, despite the fact that for years it has been considered a subcategory of television and music entertainment. In fact, in a way, the music video has much in common with the primordial cinema and with certain avant-gardes of the twenties. Of course we are talking about music videos in their most free and experimental forms, not music videos conceived exclusively as a showcase for the song or musician on duty».

«We don’t exclude any genre. We always like to experiment with new forms and possibilities. We have worked with practically all genres and even shot a music-video/documentary (‘Cincu Pammi’ by Cesare Basile). But surely our works are closer to the conceptual genre – which we believe is the one that combines in the most natural and balanced way with music, without overpowering it, and at the same time without becoming an accessory or caption. Somehow with the conceptual genre you can give cues and mention references without distorting the sense of the song and without affecting too much the viewer, who becomes a co-author and interpreter of the meaning of the video. We like the idea of the open work. We like the idea that video and music combine to create a work in which the viewer is the necessary protagonist to close the circle».

«Being a collective, usually the approach to a new job consists almost always of two phases. The first stage is that in which each of us listen to the piece on his or her own. In this phase, we all have different approaches. Rosario, for example, listens to the song many times and has an approach that could be defined as almost “scientific”. Premananda has a purely visual approach, he is a DOP indeed, and often associates the song with photographs or works that have struck him in the past. Instead, I [Giovanni] try to listen to the song as little as possible, not to let myself be conditioned too much, and often the idea comes suddenly while I do something else. In the second phase we get together, maybe in relaxed situations and in front of a few bottles of beer, and we start to expose our ideas. We spend hours discussing. Sometimes everyone has a subject, sometimes just one of us, sometimes the subject comes out in these moments. In the end, however, the result is always the result of mutual influence and collaboration».

«After the first phase – the initial brainstorming phase – which we talked about above, we move on to the actual writing phase. We write the scenes based on the rhythm and duration of the various parts of the song. Sometimes we make the storyboards, we look for reference images that we also show to the actors, we build the sequences, and we take inspiration from different things that have struck us or that we like. They’re not necessarily always films or audiovisual works in the strictest sense, but also photography, painting, works of art in general, personal memories, books. We have very varied and diversified references. Once everything has been knocked down, a work of subtraction begins. We try to eliminate everything that we consider superfluous, explanatory, or excessive. Dry to enrich, define without delimiting.⁠
⁠
On set we are very strict, we respect roles and we try to be pragmatic, because, time is always tight and budgets too, and you have to maximize every moment you have. Of course, it is often the case that scenes are modified or deleted during shooting.⁠
⁠
Editing, on the other hand, is a more thoughtful and reasoned phase, to which we devote a lot of time and importance. Personally, I believe that editing is in some way a second phase of writing and directing, especially in conceptual and experimental cinema, which as mentioned above is the one to which we refer the most. Very often, during the editing phase, we shuffle the cards, change the order of the scenes, and experiment with different solutions. Once the editing is finished, when time allows, we like to let the video “mature” a couple of days and see it again with a fresh mind.».

WHICH ONE IS YOUR BEST WORK⁠?

«It may seem banal, but we are fond of almost all of our video clips for reasons that are often different. Especially the videos we have shot in the last two years, which are the ones that most represent us as a collective.⁠

The only videos we don’t remember with pleasure are perhaps those in which particular situations or excessive limitations have compromised the final result. ⁠

If we have to choose some, more for symbolic reasons, maybe the choice would fall on Cirasa di Jinnaru and Nuddu Ca Veni. The first is because it is the video in which we decided to make a qualitative, technical, and professional leap forward. The video in which for the first time we really step up our game and we tried a cinematic approach (both artistic and productive). The second is probably because, up until now, it has been the video that has given us the greatest satisfaction in terms of recognition by the public and the critics. Both because they are videos in which we had total freedom to experiment and express ourselves as we wanted».

WHAT IS THE BEST THING ABOUT MUSIC VIDEOS⁠?

«Definitely the shooting, the life on set. There are very intense and tiring moments, not always everything goes smoothly, but these can be just as liberating. All the stress accumulated in the pre-production phase seems to disappear in a second, and it seems like you’re living in a magic bubble out of the world. It happens as a suspension of reality, you forget all the problems, and time flows differently. Personally, it’s a feeling I only feel when I travel and I find myself in places I don’t know. That sense of freedom and indeterminacy, but also the possibility of getting lost or having to solve unexpected problems, are all feelings that eventually make you feel alive. Probably we are also lucky, because we are friends and we are very close and the atmosphere on our sets tends to be almost always pleasant.⁠

Then, it’s useless to hide it, to see the client or the enthusiastic spectators and to receive positive criticism for your work is just as beautiful. We always live with great excitement the moments in which the videos are published and we read the first reactions on the social media». ⁠